Did you miss the EPA’s public meeting on April 25 at which they presented the proposed settlement agreement with New York City for the siting of an 8-million-gallon CSO retention tank at the head end of the Gowanus Canal? If so, you can view the EPA’s presentation here.

You can also watch a video of the entire meeting on our YouTube page, or read the complete, official transcript of the meeting here.

The EPA will be accepting public comments on the terms of the agreement (which you can see in full here) until May 31. You can submit comments by mail or email to: 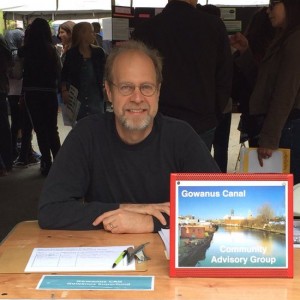 We were out Saturday at EXPOGowanus, updating attendees and passersby on the status of the Superfund cleanup of the Gowanus Canal, explaining the role of the CAG, and adding people to our mailing list.

If you have a community event in which you’d like us to participate, please send us an email at gowanuscag@gmail.com.

The Department of Sanitation of New York [DSNY] is planning to build a compost facility and a salt storage shed at the Salt Lot, which is the planned site of a retention tank. There is confusion about why DSNY is proceeding with this work in light of the EPA’s comments at the January CAG meeting that the retention tank installations could move forward. All agreed that the design and installation of both retention tanks should proceed expeditiously and be completed prior to the dredging.

Andrea and Dave will draft a resolution requesting the EPA to move forward with the OH-007 retention-tank design process and construction schedule. The draft will be circulated to the committee for review and comment. END_OF_DOCUMENT_TOKEN_TO_BE_REPLACED

Did you miss the April 25 EPA hearing on the draft settlement agreement with New York City for siting of the CSO retention tank at the head of the Gowanus Canal? You can watch the entirety of the EPA’s presentation, and comments made in response to it by members of the public, below.

[Disclaimer: The contents of this video, and other videos posted on the Gowanus Canal Community Advisory Group’s YouTube page, are provided for informational purposes only and do not necessarily reflect the views or opinions of the CAG. We make no representations as to the accuracy of the information contained therein.]

The EPA is accepting public comments on the terms of the agreement until May 31. You can submit comments by mail or email to:

Follow us @GowanusCAG for news, updates and meeting info.

CAG Member: When will selection be made?
Loney: We don’t know. There are still things that have to be resolved.

CAG Member: I thought EPA was going to start dredging and not wait on the tanks decision.
Loney: The remedy consists of multiple parts. The remedial design is still moving forward, which is the major focus of the CAG. The project is not delayed.

CAG Member: Once the deal is reached, does EPA plan to come and present to the CAG first or will there be a press conference? How will EPA inform the CAG?
Loney: We haven’t finalized any press strategy. It depends on the timing but the CAG will definitely be made aware.

END_OF_DOCUMENT_TOKEN_TO_BE_REPLACED

Alloy, a Brooklyn developer, has recently moved into Gowanus with several projects, including a new headquarters. Alloy has partnered with the owners of the Canal-adjacent properties currently under consideration as a potential site for the CSO retention tanks. Alloy is presenting a program for the site that allows the property owners to retain development and ownership rights to some of the land while allowing for public access and parkland. They want to encourage the selection of the site for the retention tanks.

Summary of the Alloy Presentation

END_OF_DOCUMENT_TOKEN_TO_BE_REPLACED

Presentation: History of the Gowanus Canal

CAG Member Joseph Alexiou and EPA’s Natalie Loney reprised their presentation of the history of the Gowanus Canal, originally presented at EPA’s national community involvement conference, outlining the development of the Canal and corresponding areas of Brooklyn over time, up to the present-day Superfund cleanup.

Q: What is the argument for restoring the 1st Street basin?
A: Toxins that are in the site and could recontamination

Q: What about flooding?
A: Not a main reason for restoring the 1st Street basin, but will provide some benefits which is important in light of climate change?

Q: What about smells and air pollution exposure? We are looking for stronger protections from certain exposures for the very young and the very old.
A: Superfund looks at future exposures over a timeframe of 30 years so the effects of chemicals in the past are less relevant and more emphasis is placed on the future.

The Gowanus CAG Outreach Committee met on Thursday, April 14, 2016, with discussion focused on continuing development of the CAG’s Communications Plan.

The group reviewed the action items from the March meeting.  Eric McClure reported that he wasn’t able to reach a solution for including a Google Alert-based RSS feed on the CAG home page, but that Josh Skaller, who created the  website, believes it would be relatively easy to do and is willing to help with that.  Josh also is willing to update the “Join the CAG” form that’s linked from the home page, and Eric will send him the full form so that he can revise the form on the site.

Eric reported that he had posted the Land Use Committee resolution on CSO tank siting approved at the March CAG meeting to the website, but had not received the Water Quality/Technical Committee resolution requesting that the EPA establish a comment period once a decision is made on the location of the tanks.  Maryann responded that she had sent the resolution to Doug Sarno, and shared it via email with Eric (it has subsequently been posted to the website).

The Outreach Committee identified several items to bring to the full CAG for approval at the April general meeting. END_OF_DOCUMENT_TOKEN_TO_BE_REPLACED

The U.S. Environmental Protection Agency and the City of New York have reached a proposed agreement on the siting of two sewer and storm water retention tanks intended to reduce combined sewer overflows into the Gowanus Canal.

In addition, the EPA announced that it will hold a public meeting about the agreement on April 25 at 6:30 p.m. at P.S. 32, at 317 Hoyt Street in Gowanus, and will accept public comments on the proposed tank siting until May 31, 2016. Comments can be made in person at the public meeting or mailed or emailed to:

The full press release issued today by the EPA is below. You can read the full draft Settlement Agreement between the EPA and New York City here.

(New York, N.Y. – April 14, 2016) The U.S. Environmental Protection Agency (EPA) has announced a proposed agreement with the City of New York that establishes the location for two sewage and storm water retention tanks, included as part of the cleanup for the Gowanus Canal Superfund Site. The agreement sets out a schedule for the design of the larger of the two tanks. It also requires New York City to undertake activities to prepare that location for the tank installation, and to pay EPA oversight costs. Prior to finalizing the agreement with New York City, the EPA is accepting public comments. The proposed administrative settlement agreement and order released today allows New York City to locate an eight million gallon retention tank in New York City’s preferred location, known as the “Head-of-Canal” location, but it also holds the city to a strict schedule. The EPA can require New York City to place the tank in the Thomas Greene Park location instead, if certain activities do not occur on schedule, including if New York City is not able to acquire the land at the Head-of-Canal location within approximately four years. The EPA is accepting public input on the work contained in the proposed agreement for the next 30 days and will have a public meeting on April 25 to discuss the work being secured under the agreement.