Earlier today, the City of New York submitted the final version of its NYC Stormwater Management Program Plan to the New York State Department of Environmental Conservation. The Plan is intended to guide the continued improvement of the health of New York Harbor. The Plan is the City’s first comprehensive effort to reduce pollution in stormwater runoff in areas served by the municipal separate storm sewer system. Click the image to view a PDF version of the full report. 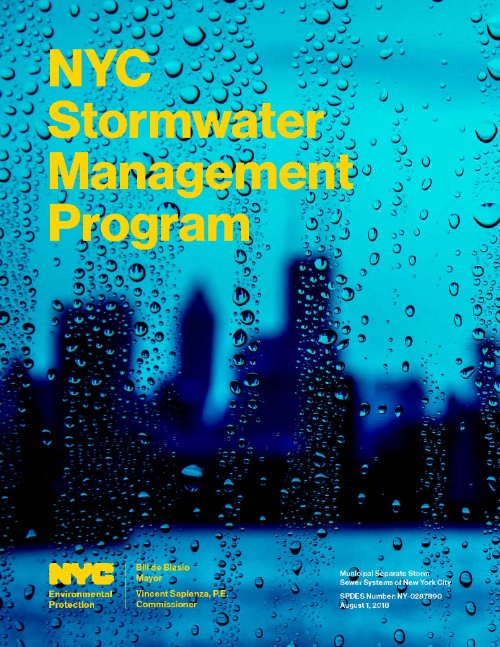 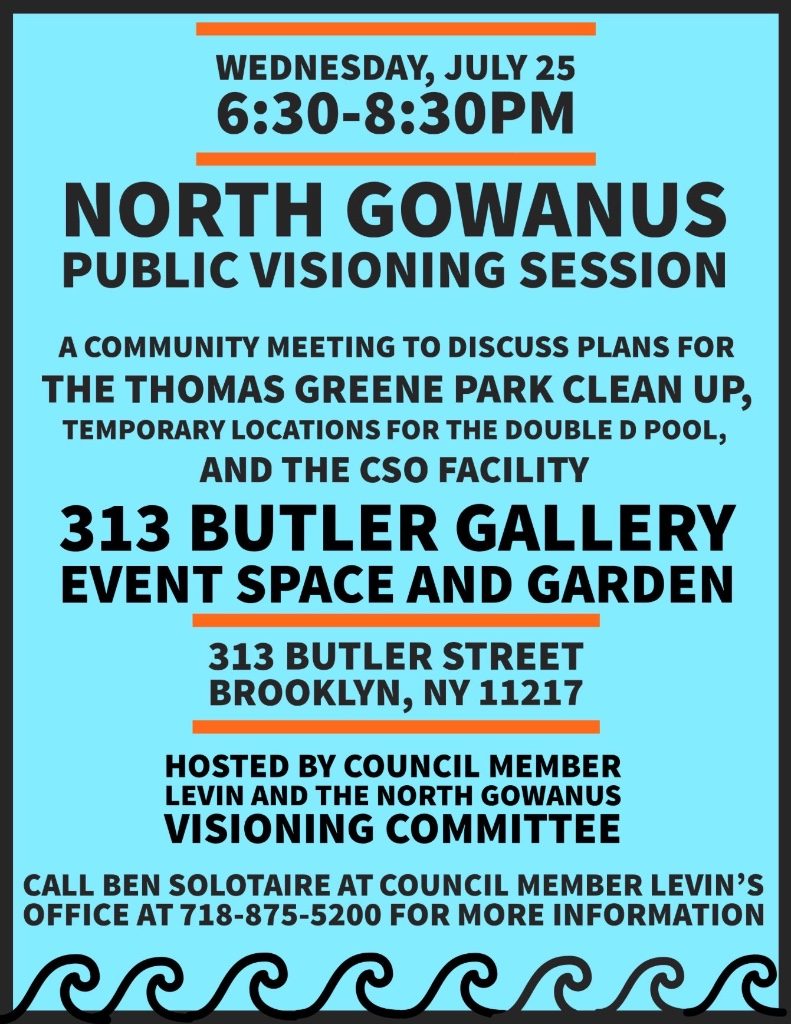 Media advisory from the EPA:

EPA Regional Administrator Pete Lopez will be at the Gowanus Canal Superfund site in Brooklyn, New York, one of the nation’s most seriously contaminated bodies of water, on Monday, July 23, 2018 at 10:00 a.m. with other dignitaries to discuss the progress of the dredging and capping pilot project. The media are invited to witness the ongoing project at the Gowanus Canal’s Fourth Street Turning Basin (located at the intersection of 4th St. and 3rd Ave). The pilot project will help inform EPA on how best to clean up the rest of the canal.

What: View and discuss the pilot project at the Gowanus Canal Superfund Site. Photo op, question and answers with EPA leadership and subject-matter experts, site tour.

The Gowanus Canal Community Advisory Group does not plan to hold a general meeting during the months of July and August.

Please join us in the fall when we reconvene for our next general meeting on September 25th.

After a lengthy and spirited discussion, all agreed that the committee recommends Peter Reich as the representative. Dave will ask the CAG to vote on this at the next meeting.

Time frame for an agreement between the New York City Department of Environmental Protection (DEP) and EPA on the design (size) of the headhouse at the north end of the canal.

After a second lengthy discussion on EPA and DEP’s role regarding a final design decision on the CSO facility at the head of the canal, and the timeline for such a decision, it was concluded that a question regarding the process will be posed to the EPA at the June 26 CAG general meeting. Dave will circulate suggested language for the question.

Doug Sarno opened the meeting at 6:40.

The March meeting summary was approved with no revisions.

The April meeting summary was approved with no revisions.

The visioning process must be a cooperative process. The CAG Resolution was also addressed to EPA – it is a community process. We think it should be an open meeting. EPA met with Council Member Levin and Ben Solotaire yesterday and made it clear that what was discussed was not approved layouts by EPA or the City. There are imperfections, and we hope that the broader community, in coordination with the CAG, will engage so that the community is assured EPA and the City are on the same page. The City’s Department of Environmental Protection said that DEP and EPA were not on the same page at that meeting.

Without most of you noticing, the bulk of sediment in the 4th Street Turning Basin has been removed. 10,000 cubic yards of sediment – averaging 600-700 cubic yards a day. We are very pleased with that. There is still some sediment at the corners and edges that require specialized equipment. A couple spots are in the native sediment. Under the general plan, EPA will stabilize these parts. Because of the smaller size of the pilot area, EPA has decided to excavate, so there’s going to be a depression and then stable material in the inside.

Following the specialized operations, they will lay the cap. Now they’re down 10-12 feet at the bottom. We are surprised how much debris was moved. Lots of plastic, wood, big rocks, tires, some items that were separated as potential archaeological elements.  A number of bricks with stamps, roll bearing, a port-hole from a ship (but no ship), a metal wheel from a car, odd metal parts. A fairly contemporary heat exchanger. There was a scrapyard right next to this location.

The Potentially Responsible Parties (PRPs) have been asked to stage the oversized items that cannot be shipped to New Jersey. EPA is willing to do a visit in the next week or so with the archaeology committee.

CAG: Does the surprising amount of debris change the speed of dredging?
EPA: We anticipate we will be able to separate and stabilize within two years according to the timeline – very happy with how this operation went. Remember, we have to put down three or four layers. Right now there are winds blowing, so that changes things. There was some damage to the Whole Foods esplanade – this is being worked out between Whole Foods and the PRPs; the agreement is that the original contractor and the PRPs are paying the whole cost.

CAG: Will that repair happen after the sheet piles go in at the Fourth Street Basin?
EPA: Unsure, but Whole Foods wants them in after the dredging but before the capping.

CAG: Will the metal barrier currently in place stay there?
EPA: They will be below the water level – the one in the barrier across will stay there until the 3rd Avenue Bridge work is finished, and will keep that cutoff wall under the bridge.

CAG: Is it safe for canoers? How far will the walls come out?
EPA: We want to make sure it is safe.

The other thing EPA promised was a Memorandum of Agreement (MOA) about the building at the top of the canal within the footprint of the design of the detention tank. EPA does have drafts but is not sharing them yet – still lots of give and take and conversations. Some briefings as far as scheduling conflicts happened later than earlier, and EPA will circulate it in the next few days and send it to Doug.

We have been in touch with State Historic Preservation Office (SHPO), and have taken the CAG comments and incorporated all the comments. We will ask for further input on how we represented what the CAG has shared in approximately one month. We have had consultations for six months. As we promised and as Brian said, you’ll have the ability to provide input again, and EPA will come up with a final decision in mid-summer, probably by July.

END_OF_DOCUMENT_TOKEN_TO_BE_REPLACED 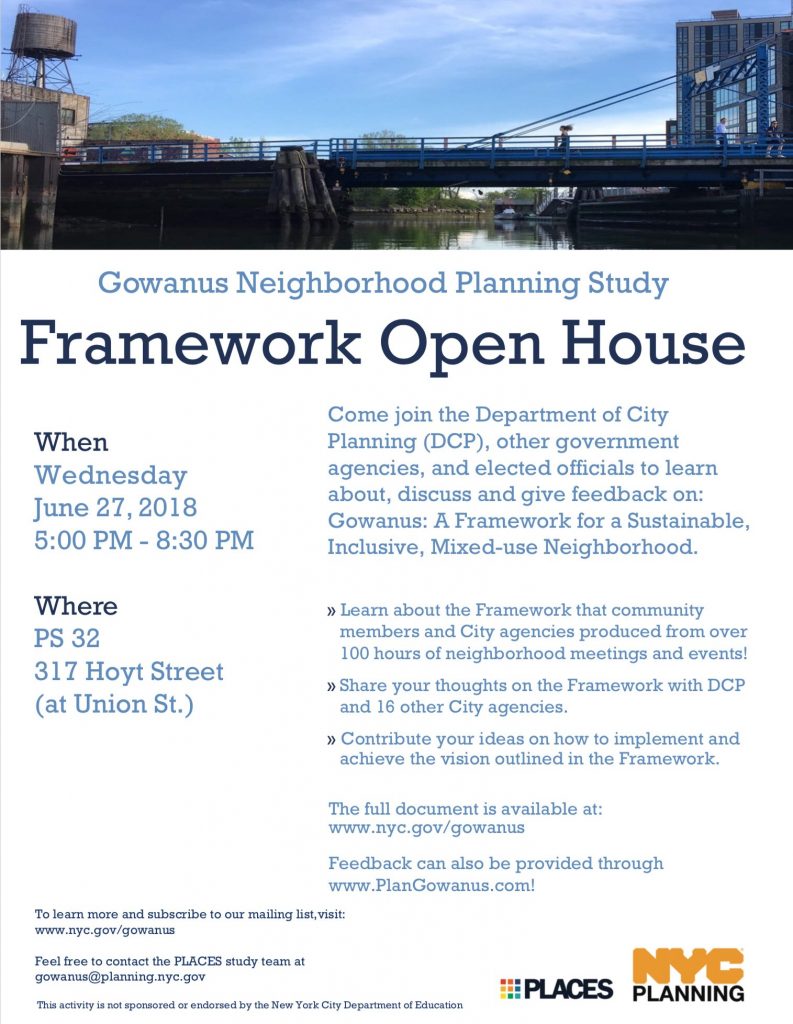 Gowanus: A Framework for a Sustainable, Inclusive, Mixed-use Neighborhood is a roadmap for potential goals and strategies, including recommended land use changes, to be developed and implemented as part of a Neighborhood Plan. The framework is the culmination of more than 100 hours of public outreach and community meetings to solicit input since the Gowanus PLACES Study launched in October 2016. (More information about the Gowanus PLACES Study is available on the Project Overview and Milestones tabs). It is informed by previous reports and studies, including Bridging Gowanus, and ongoing community efforts by government agencies and community stakeholders and organizations.

The vision laid out in this framework aims to foster a thriving, inclusive and more resilient Gowanus where existing and future residents and workers are able to participate in civic, cultural and economic activities and where a wholly unique resource – the Gowanus Canal – can thrive and play an active role in that equitable and sustainable growth.

The Department of City Planning will present an overview of the report to Brooklyn Community Board 6’s Executive Committee on Monday, June 11, at 6:30 p.m., at PS 32, 317 Hoyt Street, in Carroll Gardens.

Recent dredging of the Gowanus Canal’s 4th Street Turning Basin, where contractors are conducting pilot work to test the efficacy of methods for cleaning and capping before rolling out the effort to the rest of the canal, have turned up a lot of junk, especially old tires.

But not everything being removed from the canal’s muck is mundane. Notable items include a brass porthole, a ship’s anchor, lots of stamped bricks, and a pair of 40-inch-diameter wooden wagon wheels, pictured below (photo by J. Bream, taken on May 18). 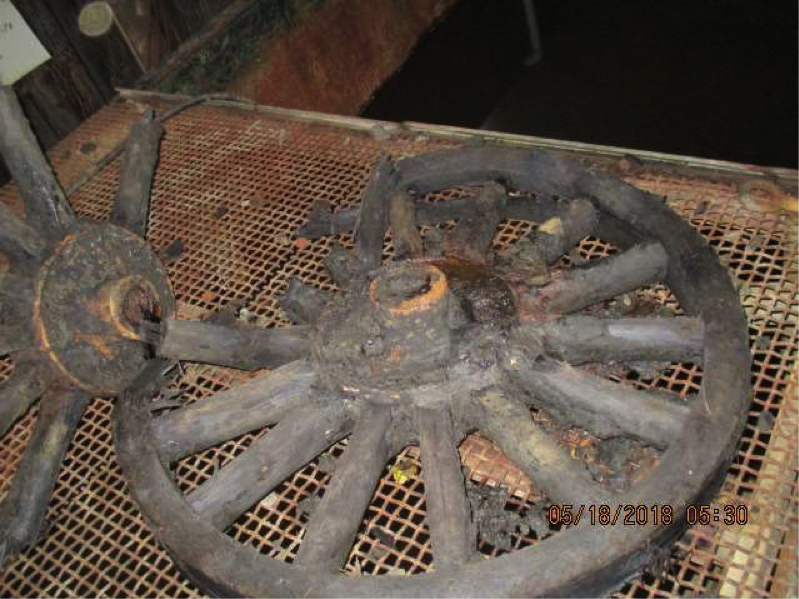 Approval of minutes from the March meeting was postponed.

After the concerns about noise and vibration damage resulting from the initial pile-driving activities, EPA directed the team to conduct future pile-driving using a Giken Silent Piler, which produces fewer vibrations and disturbances on land and buildings. Use of this new technology has been going very successfully, so contractors are finishing the piling this week in preparation of support for dredging and capping. Should be re-starting activities next week.

CAG: So you’ve been driving sheet piles?
EPA: Yes, it is very quiet – you can’t even hear it, only the engines.

Beginning in November, there was a recommendation to get this technology and we did. We will be dredging, and then capping, in this pilot.  We anticipate those activities will last through the end of the summer. The goal is still to begin dredging of the main canal sometime in late 2020. This is still within reach, even with the bulkhead delay.

Moving north, the design of the First Street basin continues. Further north, the cutoff wall for the Fulton Manufacturing gas plant will be in place from top of the canal to Union Street; the design began when National Grid was working with New York State, so EPA made some fixes and created a 50% design. Once there is agreement on all the elements, we don’t have to divide stages; the 95% design should be completed by May 2018. EPA expects a finalized order to be signed, based on the schedule, by December 2019 or early 2020.

The new bulkhead is being installed in front of existing bulkheads – the top of the new wall sticks above the water. The design was done for two reasons:  too much encroachment, and deciding to use the Giken Press at the 4th Street basin.

CAG: How tall is the bulkhead?
EPA: About 50 to60 feet total; this is part of the remediation to prevent tar from coming in.

CAG: Will that wall be vulnerable to something hitting it?
EPA: Yes, it is a thick, steel bulkhead.

There is usually a two-foot offset from existing barrier besides water.

Finishing up with designs for the First Street basin by 2019. The 95% design should be complete in a month. Regarding 4th Street – just readjusted the design, anticipate both the wall and construction will be done by 2018 and completed by 2020.